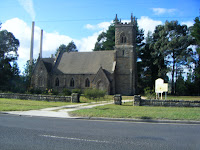 St Johns was designed by Blacket & Son, architects and was built by George Donald who was the first mayor of Lithgow NSW and was opened on 6th November 1881 as the "Wallerowang"estate private chapel.

It was used by the Presbyterian & Anglican Churches from the outset and given to both denominations on 18th November 1952.

The Church was in use until 2000 when it was closed due to the need for repair to the bell tower. Shortly after this closure, the decision was contemplated by both Churches to sell St Johns. The public, on hearing the news of the proposal to sell, called a special community meeting on 27th March 2002 and from this meeting, "The Friends of St Johns" was formed and opposed the proposal. Fortunately, the majority of the Presbyterian Parish of Bowenfels supported "The Friends" and St Johns was retained.

The Anglicans relinquished their fifty per cent share of St Johns in 2002, selling it to The Friends. The Friends became incorporated on 22 July 2003. When repairs were completed, St Johns was re-opened on 14th May 2006 after a six year hectic campaign.


"The Friends of St Johns" and Bowenfels Presbyterian Parish are now joint owners. St Johns is a heritage listed and is a Christian non denominational Church as by Charter passed in March 2007.

The Friends of St Johns annual meeting will be held on 7th May 2009 at 7:0pm in the CWA Hall, Wallerawang. Everyone is most welcome to attend and share the interest in our beautiful piece of heritage. How fortunate we are to have this priceless piece of architecture here in Wallerawang NSW Australia.

I would like to thank Annette Hamilton from "The Friends of St Johns" for providing the above information.
Posted by In vita scientia at 9:32 PM